This specification is available for purchase in the following bundles:

Non-structural metal framing is used in interior wall and ceiling assemblies where structural loads do not apply. This framing does resist some loads including the weight of the wall or ceiling assembly and loads applied by occupants. They are not intended to withstand wind loading.

Partition framing consists of steel top and bottom channels with C-shaped steel studs spanning between them.

Studs have punched webs to allow for the placement of piping and wiring.

– C-shaped steel runner and furring channels in a grid pattern, suspended from the overhead structure by wires.

– T-shaped steel members with interlocking ends, similar to those used in acoustical ceiling grids, placed in a grid pattern and suspended from the overhead structure by wires.

Shaft wall assemblies allow for gypsum board partitions for elevator, stair, and air shafts to be constructed without the need to erect scaffolding in the shaft.

While not exposed to weather, interior framing is typically lightly galvanized or otherwise corrosion-resistant coated to prevent rusting during shipment and storage and after installation until the building is weathertight. 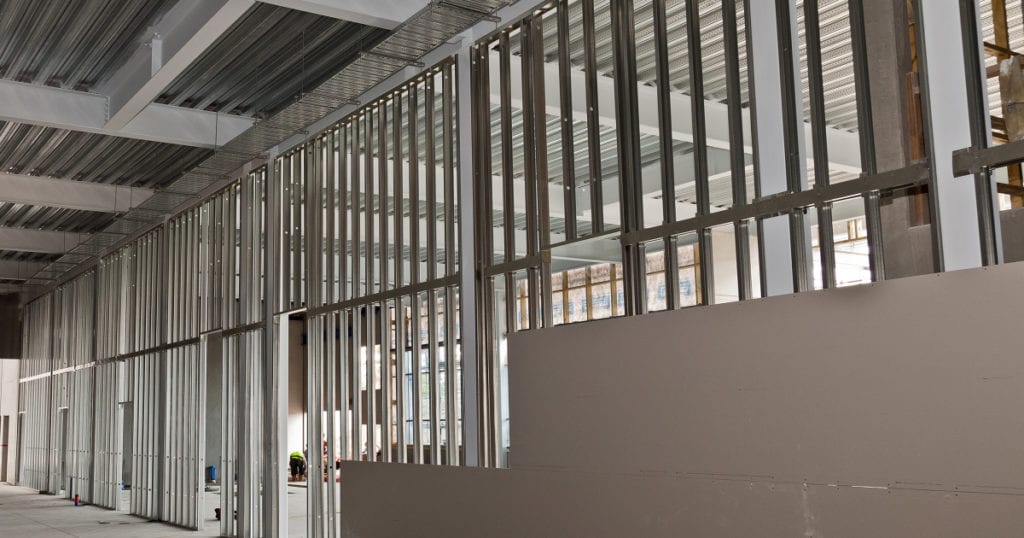 Design professionals are accustomed to seeing lengthy project specifications, so why is SimpleSpecs™ so short?

Specifications have grown evermore wordy over the years for several reasons:

SimpleSpecs™ is written as a series of Microsoft word files that include statements that affect construction costs or overall quality and are far simpler to edit than other master specification systems.

Each SimpleSpecs™ specification section is non-proprietary and includes three manufacturers that meet the specified reference standards, descriptive, or performance-based requirements. They are written to allow any listed manufacturers to provide the specified products.

Each SimpleSpecs™ specification section includes hidden text to inform and guide users in editing the specifications to suit project conditions.

SimpleSpecs™ sections are edited using pre-defined options that are contained in [brackets] or by selecting optional text separated by "OR" statements. Paragraph and page numbering are included as automatic codes, eliminating the need to renumber when revisions are made manually.  Global changes to headers, footer, terms, font colors and phrases are easily updated using a third-party search and replace software, available through ZeroDocs.com.

GET STARTED__IT'S FREE
TAKE A TOUR